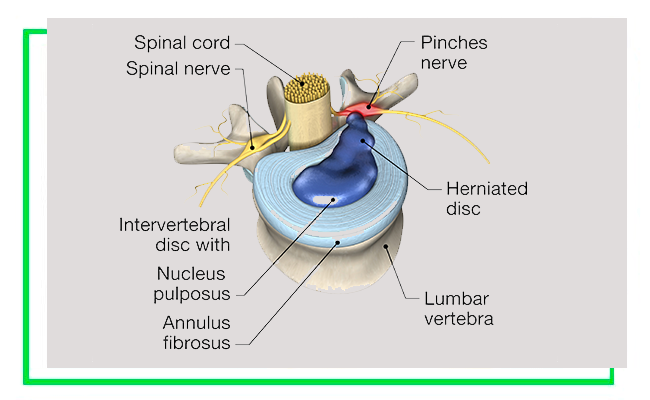 The bones along the spine are separated by shell-shaped discs that sit between the individual bones or vertebrae. These discs have a jelly-like center called the nucleus. The nucleus of each disc is encompassed by a tougher, rubber-like exterior called the annulus. A herniated disc happens when there’s a tear in the annulus and that soft center of the nucleus pushes through the exterior layer. People will sometimes refer to a herniated disc as a slipped disc or a ruptured disc.

Major or minor car accidents can result in a herniated disc. This type of injury isn’t only painful, but it can lead to more severe physical problems if it’s not diagnosed and treated properly. If you’ve recently been in a car crash and you’re experiencing pain in your lower back or neck, contact our office as soon as possible for an examination.

What You Need to Know About a Herniated Disc

If you’ve been in an auto accident and you believe you might have a herniated disc, it’s critical to see a medical professional at First Choice Wellness immediately. Not only is it important to begin treating a herniated disc right away, but it’s also essential to complete a full examination of the neck and back. This can help to rule out any other injuries that could be more severe, like broken bones, and identify any other car accident injuries, such as whiplash. Here are some frequently asked questions that patients often ask when diagnosed with a herniated disc. For further information about herniated discs and other common car accident injuries, contact our office today to schedule an appointment.

What are the symptoms of a herniated disc?

What complications are associated with a herniated disc?

There are some very serious complications that are associated with a severely herniated disc that results from a car accident. One of those complications is called cauda equina syndrome. Cauda equina syndrome occurs when a slipped disc cuts off nerve impulses to the nerve roots just above the waist and below the spine. This can cause someone to lose bladder or bowel control.

A severely herniated disc can also lead to permanent nerve damage around the inner thighs, the back of the legs, and around the lower back, also known as saddle anesthesia. Because of these serious complications, it’s highly advised to seek medical attention when faced with a herniated disc after a car crash. If you’re experiencing back or neck pain, or tingling sensations, contact our office today for a full examination. Our chiropractic care includes MRI exams for accurate diagnoses of herniated discs.

What activities should you avoid with a herniated disc?

There is a long list of everyday activities that people should avoid after being diagnosed with a herniated disc. These include, but are not limited to:

We understand that a herniated disc isn’t only painful, it also places many limits on your daily life. This is a key reason why a herniated disc should be diagnosed and treated with the utmost care. Schedule an appointment at our Lauderhill office if you’re concerned about a herniated disc after you’ve been in a car accident.

What if a herniated disc goes untreated?

In addition, untreated herniated or slipped discs can lead to saddle anesthesia, which is nerve damage around the back of the legs and inner thighs. These conditions aren’t only serious, they can also be permanent. Medical professionals highly recommended treating a herniated disc caused by a car accident as soon as possible. Remember that a herniated disc and other car accident injuries may exhibit delayed signs and symptoms.

What are the treatments for a herniated disc?

Remember that all of our patients will receive a medical consultation to discuss symptoms and a customized treatment plan for their auto accident injuries. Your herniated disc treatment plan will depend on the severity of your injury, your current health, your age, and other factors. No two car accidents or two bodies are the same, so we make sure to customize each treatment for a herniated disc. However, some general treatments of a herniated disc often include physical therapy, massage therapy, over-the-counter pain medications, gentle stretching and exercise, and rest. To learn more about common treatments for a herniated disc, contact First Choice Wellness today.

Can you be compensated for a herniated disc injury caused by a car accident?

Yes. At First Choice Wellness, you aren’t only receiving a combination of medical and chiropractic care, you’re also gaining access to our network of lawyers that can help you file claims and receive compensation for your car accident injuries. Settlements for cases of a herniated disc will vary due to the severity of the injury and the circumstances surrounding the accident. In order to receive compensation for a herniated disc, it’s important to work with an experienced car injury lawyer who can negotiate on your behalf and guide you through the legal procedures. To learn more about receiving medical care as well as compensation for a herniated disc, contact First Choice Wellness today to learn more about our comprehensive legal services.

Watch for these commonly delayed symptoms

Late-appearing car accident injuries can sometimes present challenges with an insurance claim. Insurance carriers may assume accident victims are exaggerating or fabricating their symptoms. The longer the period between your accident and your diagnosis or symptoms, the harder it becomes to establish it was the accident that caused the injury. As many symptoms may not present immediately - watch for these commonly delayed symptoms: